The importance of our soil biology and its activity is not often spoken about when farmers are considering their N inputs for the season. Instead rates and expected dry matter tend to be the main talking points. Overlooking the biological processes is what limits farmers from getting the most out of their N inputs. It also illustrates why we often see farmers having to put more and more N on to get the same yields. This often comes down to having low soil biology and poor soil structure, which increases there losses. In order to illustrate my point let me explain the mechanisms of how we get N in the soil and how N is lost. 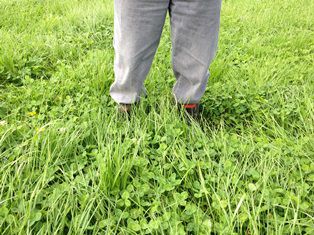 How do we get N in the Soil

Bacteria and plants roots convert atmospheric N into Ammonium which can be used by plants and be put through the nitrification cycle. In New Zealand this has been trialed extensively and it is generally accepted that Clover can produce 25 kg N  per tonne of DM grown.

Soil organic matter in the soil is broken down by decomposing microbes. This decomposition produces ammonia, which can then go through the nitrification process. Since this is biological the process is highly impacted by temp, moisture, pH and aeration among other things. In good conditions and with active soil biology you can extract up to 15kg of free N per percentage of OM in your soil. So if you have 5% OM in the soil it can potentially mineralise 75Kg of N.  Conversely poor OM, aeration and soil biology will mean that you mineralise very little or even lose N through immobilisation. So we need to make sure we add OM to our soils, build soil structure and have an active soil biology to maximise mineralisation. 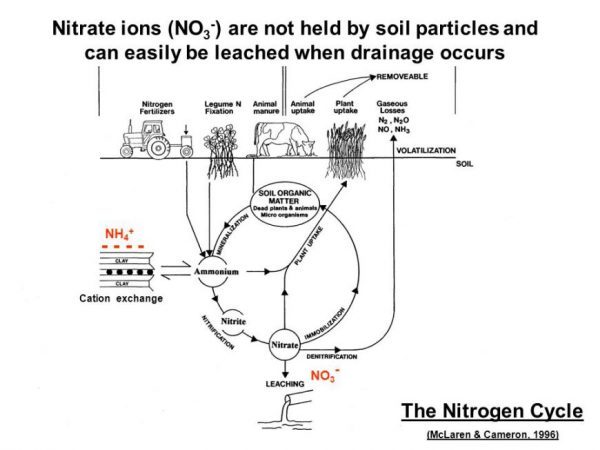 Bacteria in the soil convert N inputs from ammonia through to nitrate. This process is called nitrification. Compounds such as nitrate, nitrite, ammonia and ammonium can be taken up from soils by plants and then used in the formation of plant and animal proteins. Take Urea for example, Urea is converted through an enzyme ‘urease’ to Ammonium then it enters the nitrification cycle. Urease can be found in seeds, plants and microbes but predominantly is produced by microbes in the soil E.g. Many animals excrete urea in their urine. Soil micro-organisms feed on animal urine, producing urease to transform the urea to ammonia, which is then readily accessible to plants.

The ways in which Nitrogen is lost

Denitrification is a biological process which occurs due to lack of oxygen in the soil. Because the bacteria can’t access Oxygen from the atmosphere they then take Oxygen out of the nitrate molecule which then creates a gas leading to atmospheric losses. Susceptible soils include, clay or compacted soils, soils that are heavily worked leading to a crust on top and even heavily thatched soils.These soil s are very common in New Zealand Agriculture with climate and stocking issues contributing to exacerbate the problem. The way that we can reduce the likelihood of this happening is:

This happens when urea combines with water and becomes ammonia. If it does immediately come in contact with the soil then it can be lost through denitrification. These processes are speed up by temperature and rainfall etc. 30% of your N inputs can be lost at this phase. It can be reduced through using inhibitors, incorporation in the soil and a rain or irrigation event post application.

Leaching is primarily caused due to Nitrate being a negatively charged molecule so it moves down through the soil profile which obviously leads to leaching. What influences leaching is heavy rainfall or over irrigation, high amount of nitrates in soil e.g. over fertilisation and saturated soils. The way that we can reduce the likelihood of this happening is:

How EM can enhance these Biological Processes 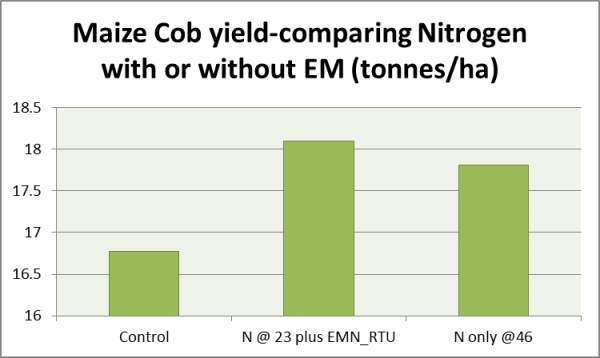 The above points showcase the huge impact of microbes in getting N to our plants. By utilising biological inputs and in our case EM we can enhance these processes that will;

EM will also as a soil decomposer release available N through organic matter recycling.  In addition the EM effect on improving aeration in the soil and soil structure will ensure that volitisation is minimal. Below I have highlighted some published trials showcasing the effect EM has on increasing the N content of the soil to further illustrate these points.

Another trial (Lim, Pak, & Jong, 1997) conducted in Korea, looked at the effect of EM treatment on the content of nutrients in the soil. The EM treatment increased the content of soluble nutrients. The contents of soluble nitrogen, phosphorous and potassium increased 4.4, 3.6 and 2.8 mg/100g soil, respectively. The increase of soluble N, P and K contents might be attributed to activity of nitrogen fixers and organic acids excreted by the different organisms in EM.

In the next trial published in the Biological Agriculture and Horticulture Journal in 2011 title ‘Effective Micro-organisms’ (EM): An Effective Plant Strengthening Agent for Tomatoes in Protected cultivation. N mineralization at later stages of the experiment was higher in the EM treatment. It was also determined that a more even N supply to the plants in the EM treatment, combined with the effect of a direct stone dust-application onto the plants, clearly increased plant yield and fostered plant health.

This final trial published in the American Journal of Alternative Agriculture looked at Rice and wheat production in Pakistan with effective microorganisms. The results of a three-year study in Pakistan show that EM applied in combination with chemical fertilizer, green manure, and farmyard manure significantly increased the yields and nutrient uptake of rice and wheat, compared with these treatments applied singly. 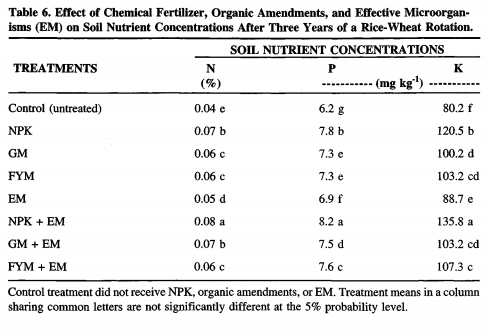 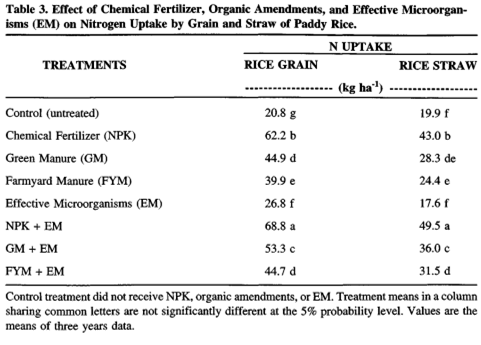