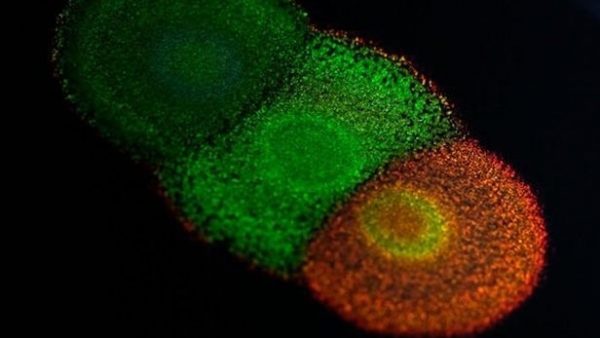 A colony of flavobacteria, which appear vibrant colors thanks to the geometric structure of the bugs(Credit: University of Cambridge)

A lot of bacteria might have a bad rep, but with a little genetic tweaking we can put them to work producing drugs, cleaning water, detecting long-forgotten landmines, and repairing concrete. Now a team from the University of Cambridge and a Dutch company called Hoekmine BV has outlined how we might one day grow new organic paints and coatings out of vibrantly-colored bacteria colonies.

The bug in question is known as flavobacteria, and colonies of them appear as bright metallic colors. That showiness doesn’t come from pigments, but rather the microscopic internal structure of the colonies, which reflect light at different wavelengths to create, to our eyes, a certain color. It’s the same mechanic that gives butterfly wings and peacock feathers their iridescence, and just how the bacteria arrange themselves this way was something the researchers wanted to find out, on the genetic level.

“It is crucial to map the genes responsible for the structural coloration for further understanding of how nanostructures are engineered in nature,” says Villads Egede Johansen, first author of the study. “This is the first systematic study of the genes underpinning structural colours – not only in bacteria but in any living system.”

To investigate which genes might be at play in creating the striking colony colors, the team engineered flavobacteria with specific mutations, then compared them to a control group of “wild-type” bugs. The researchers tweaked genes that altered how big the bacteria were and how well they could move, which affected the geometry of the colony as a whole. That in turn changed which color it appeared to be.

“We mapped several genes with previously unknown functions and we correlated them to the colonies’ self-organizational capacity and their coloration,” says Colin Ingham, senior author of the study.

The colonies’ natural color is a metallic green, but through trial and error the team was able to make them appear virtually any color in the visible spectrum, from blue to red. They also managed to dull the color down, and even remove it altogether.

The researchers say these engineered bacterial colonies could one day be used to grow organic, biodegradable and non-toxic paints and coatings in whatever color is needed.

“From an applied perspective, this bacterial system allows us to achieve tuneable living photonic structures that can be reproduced in abundance, avoiding traditional nanofabrication methods,” says Silvia Vignolini, co-senior author of the study. “We see a potential in the use of such bacterial colonies as photonic pigments that can be readily optimized for changing coloration under external stimuli and that can interface with other living tissues, thereby adapting to variable environments. The future is open for biodegradable paints on our cars and walls – simply by growing exactly the color and appearance we want!”