Sepsis occurs when the body’s response to the spread of bacteria or toxins to the bloodstream damages tissues and organs. The fight against sepsis could get a helping hand from a surprising source: gut bacteria. Researchers found that giving mice particular microbes increased blood levels of immunoglobulin A (IgA) antibodies, which protected against the kind of widespread bacterial invasion that leads to sepsis. 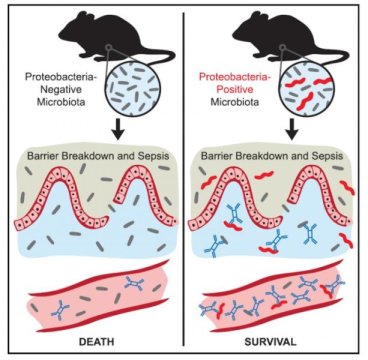 This visual abstract depicts the findings of Wilmore et al., who demonstrate a role for serum IgA in protection against polymicrobial sepsis. Induction of protective concentrations of T cell dependent serum IgA requires colonization of the gut with a complex microbiota that includes bacteria in the phylum Proteobacteria. Credit: Wilmore et al./Cell Host & Microbe 2018

Prior work has linked IgA responses to gut microbes and IgA specific to components of intestinal bacteria have been detected in sera of mice. Additionally, people with IgA deficiencies are more likely to succumb to sepsis. However, whether these two observations were linked in any way remained an open question.

“We propose that serum IgA and IgG antibodies may play roles similar to the protective role proposed for natural IgM antibodies, with the IgA component providing a non-inflammatory mechanism for keeping invading bacteria in check,” says first author Joel Wilmore of the Perelman School of Medicine at the University of Pennsylvania.

To investigate this possibility, senior author David Allman, also at UPenn’s Perelman School of Medicine, and his team looked at IgA antibodies, which are readily detected in mice and humans but whose role in host protection against sepsis was unknown. The researchers found that exposing mice to a unique but natural microflora that included several members of the Proteobacteria phylum led to increases in IgA levels in the blood. Moreover, shifting the mouse gut to a Proteobacteria-rich microbiota led to IgA-mediated resistance to sepsis in mice.

When the researchers transferred blood lacking IgA into mice with sepsis, all but one animal died within two days. By contrast, mice that received blood enriched in IgA survived much longer. Taken together, the findings suggest that commensal microbes can have a substantial impact on IgA levels in the blood, resulting in protection against bacterial sepsis.

Based on these findings, the researchers plan to further dissect the mechanism by which IgA confers protection against sepsis and explore ways to harness the specific properties of these antibodies to develop a treatment that may be applied to human disease. In the meantime, they urge caution against over-interpreting the new findings.

“The study is limited by the fact that the microbiome in every person or animal is unique to some degree, and our study is in the context of the animal facility at the Perelman School of Medicine at the University of Pennsylvania,” Allman says. “While IgA protected mice in our study, it should not be assumed that IgA could replace standard treatments provided to patients in a clinical setting.”

This work was supported by National Institutes of Health.