When imagining where an agricultural vanguard might occur, one could be forgiven for overlooking our sprawling urban playgrounds of concrete and metal in favor of the more historically fertile ground found in the rural parts of our country. But at least one company, Innovative Organics, situated only a few miles west of downtown Denver in a 12,000-square-foot rental space, is proving that you don’t need to dig your toes into the earth in order to rejuvenate it. You do, however, still need to get your hands dirty. 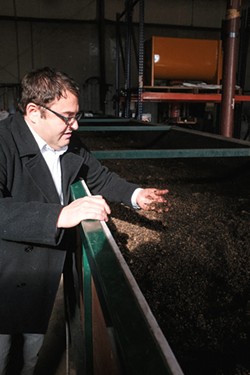 “I put my hands into the castings and played with the worms,” says Innovative managing partner, Victor Restrepo, recalling the difference between working with his hands now and when he used to shake hands with the suits of finance and insurance. “And there was a sort of relief that would take over.”

This relief was enough to sway Restrepo into taking on a more heavily involved role in what was initially a casual venture into a very nascent (at the time) cannabis industry. What Innovative largely aimed to bring to that market was a variety of soil products, guaranteed to be in high demand by a post-legalization growing boom.

However, they quickly ran into some of the logistical issues that lie in the large-scale production of compost (which was to be a key ingredient across their product line) in tight, urban quarters.
“You had to wear a mask just for the flies,” Restrepo recalls. “If you blew your nose: flies.”

Plus, traditional composting is a months-long process of decomposing organic matter that’s unswayed by the pace of the market. Between the mess and the long wait, you’ve got a young company needing to innovate around some major challenges. And that innovation, central both in name and mission to the company, is best illustrated in their one word response to these obvious issues: bokashi.

Often attributed as a product of Japanese agricultural practices, bokashi is sometimes referred to as a specific mode of composting, but is more precisely and scientifically related to fermentation. It comes down to the difference between decomposition and preservation. Where compost depends on an aerobic process (i.e. involving oxygen) for microbes to break down matter, bokashi occurs in an airtight non-aerobic environment (i.e. barrels) that leads to the production of various acids that are then mediated by a cocktail of added microorganisms. In layman’s terms: they both benefit soil, but the processes and benefits are not the same.

With bokashi, according to Restrepo, “All of the nutritional value of the food is still there; nothing has been oxidized, so nothing is lost to the environment. If we had compost and we had it outside, it would be evaporating, the oxygen would be burning, it would be creating methane, carbon dioxide, water vapor, ammonia — all the things that need to be in the ground would be lost to the air and creating a pollutant.” 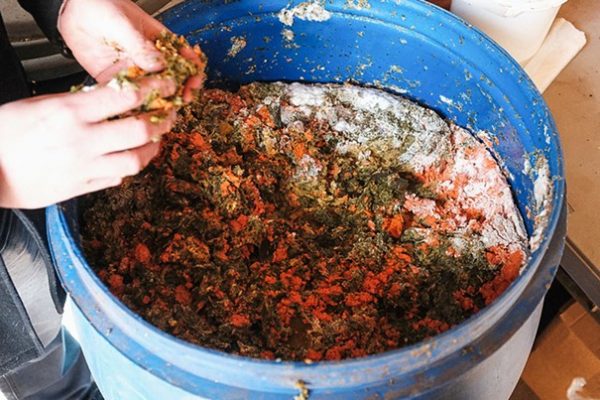 But perhaps the greatest benefit of bokashi?

“Compost takes 100 days and you lose about two-thirds of what you started with. Here, in 10 days, we still have 100 percent with all of the nutritional value concentrated,” he says. Still, despite these seemingly no-brainer benefits and generations of practice in the eastern hemisphere, bokashi remains a rather unknown quantity stateside. Studies are scarce and word of mouth weak, but speak to those who have experienced it and you might be hard-pressed to find a bad word.

Nicolas de la Vega, a Springs resident who commutes to Denver every day to work in multiple capacities for Innovative, relays a recent example: “In 2016 we worked with the Rosedale community garden in Denver to show them that all of the weeds and leftover plant waste was useful. This year they would not give us any of their plant waste or weeds and they now schedule regular bokashi work days.”

The specific brand of natural, speedy sustainability that bokashi can offer has obvious application to food production, and doubly so when considering the remediative effects of introducing it to the soil. But one of its more surprising benefits is the way it could dramatically reduce cannabis waste by putting that waste back into the bokashi mixture.

“One of the strongest inputs we use is weed,” says Restrepo.

The benefit is multiple: Waste is reduced while soil is strengthened; stronger soil then enriches a higher-quality product. This symbiotic relationship between the bokashi, soil and crop can also be transposed onto a similar dynamic between Innovative Organics, cannabis growers and food producers.

Bokashi is not a cannabis-specific movement. In fact, it’s being used with increasing frequency in food production with potentially huge consequences. But Restrepo and his team only came to the method as a means of taking part in the new, thriving weed industry and their client base is still largely made up of cannabis cultivators. Restrepo hasn’t forgotten it or taken it for granted, offering free consultations to his clients in cannabis while saying, “The little opening that allowed these growers to exist, also allowed this little business to exist.”

Still, he sees a broader picture in which both the company he helps manage and the industry that supports the company are only two cogs in something much grander.

“I believe we’re going to see a revolution in agriculture in this country,” he says, “and I want to be a part of it.”