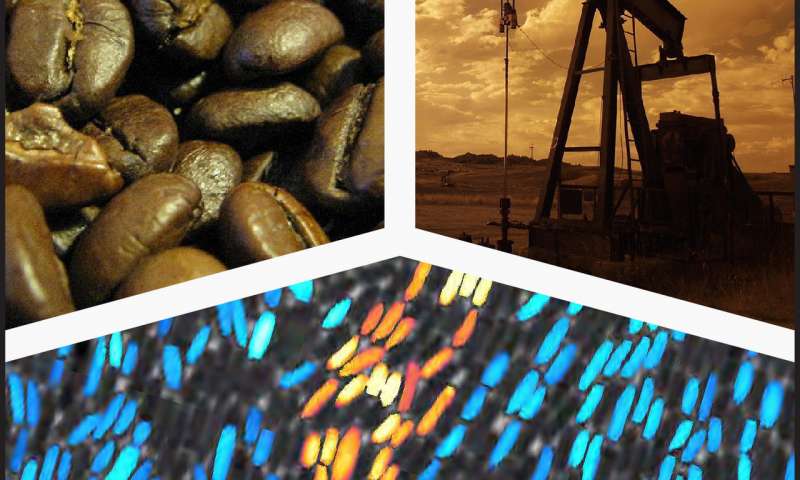 It’s the way we end up with a fresh cup of coffee from a clump of beans. It’s how ocean oil rigs extract petroleum from dense rock formations beneath the seafloor. It even helps explain how forest fires spread.

A theory known as “percolation” is now helping microbiologists at the University of California San Diego explain how communities of bacteria can effectively relay signals across long distances. Once regarded as a simple cluster of microorganisms, communities of bacteria—also called “biofilms”—have been found to utilize ion channels for electrochemical communication that helps the community thrive and survive threats, such as chemical attacks from antibiotics.

The findings, led by Joseph Larkin and senior author Gürol Süel of UC San Diego, are published July 25 in the journal Cell Systems.

Biofilm communities inhabit locations all around us, from soil to drain pipes to the surface of our teeth. Cells at the edge of these communities tend to grow more robustly than their interior counterparts because they have access to more nutrients. To keep this edge growth in check and ensure the entire community is fit and balanced, the “hungry” members of the biofilm interior send electrochemical signals to members at the exterior. These signals halt consumption at the edge, allowing nutrients to pass through to the interior cells to avoid starvation.

“This keeps the interior fed well enough and if a chemical attack comes and takes out some of the exterior cells, then the protected interior is able to continue and the whole population can survive,” said Larkin, a UC San Diego Biological Sciences postdoctoral scholar. “It is essential that the electrochemical signal be consistently transmitted all the way to the biofilm edge because that is the place where the growth must be stopped for the community to reap the most benefit from signaling.” 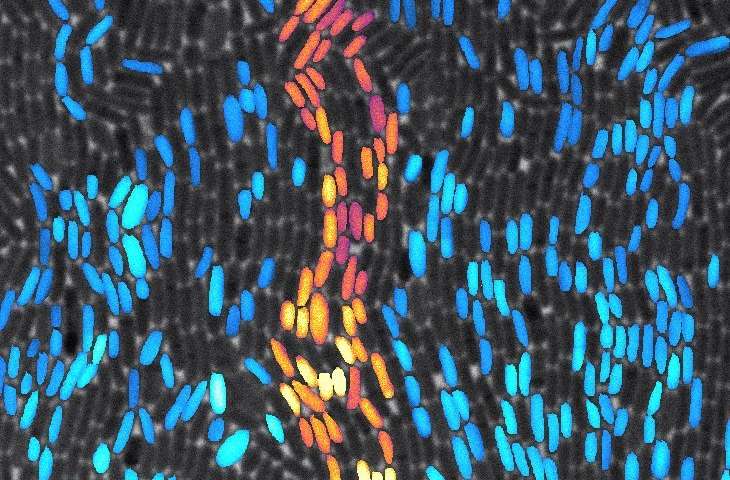 In approaching their new study, the researchers sought to explain how bacterial communities are able to propagate these electrochemical communication signals. Unlike neurons that have designated structures to relay electrochemical signals known as axons, bacterial communities lack such sophisticated structures. This provoked the question of how bacteria could relay signals so effectively over long distances within the community.

After sifting through vast amounts of bacterial data, the UC San Diego researchers began collaborating with Purdue University’s Andrew Mugler and Xiaoling Zhai, who proposed the idea that percolation theory could explain how bacterial communities may be propagating signals from cell to cell.

Percolation theory has been around since the 1950s and has helped physicists describe how signals are transmitted across a medium or network of diverse components. In a coffee maker, hot water percolates through individual coffee grounds into a carafe. In the oil industry, drillers maximize their yield by extracting petroleum from percolated sands, where the bedrock is porous enough to allow oil to flow over a large area.

In a community of bacteria, signals pass from cell to cell in a connected path over a distance of hundreds of cells. Using fluorescence microscopes, the researchers were able to track individual cells that were “firing” (transmitting a signal). The scientists found that the fraction of firing cells and their distribution in space precisely matched theoretical predictions of the onset of percolation. In other words, the bacterial community had a fraction of firing cells that was precisely at the tipping point between having no connectivity and full connectivity among cells, also known as a critical phase transition point.

“We’re all familiar with how we make coffee through percolation and it’s an interesting twist that bacteria appear to use the same concept to accomplish the very complicated task of efficiently relaying an electrochemical signal over very long distances from cell to cell,” said Süel.

“It’s interesting that these bacteria, which are so-called simple, single-cell organisms, are using a fairly sophisticated strategy to solve this community-level problem,” said Larkin. “It’s sophisticated enough that we humans are using it to extract oil, for example.”