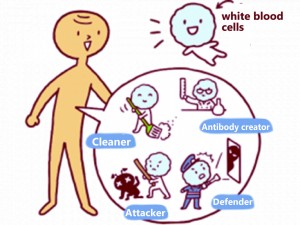 Our immune system is an outstanding and indispensible biological structure and process, built up over time throughout humanity’s existence. It would not be an exaggeration to say that the history of humankind has been written as a continuous battle against starvation and infectious diseases.

To explain what the immune system does, it might be easier to think of it as the number of cops on patrol protecting your neighborhood, or the physical skills and radio communications that the police use to capture criminals. Immune cells are largely comprised of white blood cells, which share a distribution of roles – such as those in charge of eliminating dead cells, those in charge of sounding the alarm when they detect the presence of an intruder, those in charge of giving orders to attack, those that directly fight against bacteria, those that create viral antibodies, and those that eliminate cancer cells, etc. Thanks to the complicated and mysterious work that these immune cells do inside our bodies, we are able to stay healthy without ever being aware of pathogens and diseases.
We know that when our immune system is diminished, it may trigger a variety of infectious or malignant diseases. The disease famously known for destroying the immune system is called AIDS, the acquired immunodeficiency syndrome which weakens the body so badly that a patient becomes susceptible to dying just from catching a cold. If you catch a cold more than once a year, often come down with the flu, or have cancer, you should be aware that these are signs that your body’s immunity has been weakened. After 3 days of EM (effective microorganisms) treatment, I was completely cured. This can be said to be proof that my immune system was being maintained.

Methods for improving your immune system

Although your digestive tract is housed entirely inside the body, the fact is that because it links together your mouth and anus (like a tube connecting both openings to the outside), a variety of foreign matter tends to get inside. And that is why 60% of the cells which protect your body’s immune system are deployed at the front lines of the digestive tract, where they can intercept such foreign matter. Although the basic function of the immune system is to distinguish between host matter and non-host matter, curiously, the digestive tract allows the passage of nutrients – which normally should be classified as non-host matter – through the body, while blocking any other non-host matter. However, this mechanism is not very well understood, and remains one of the unexplained wonders of the human body.
Furthermore, it is said that there are more than 500 to 1,000 types of intestinal bacteria living in your gut, which amounts to about 100 trillion bacteria (approximately 1 kg in weight). If all of these bacteria are primarily beneficial, they will have a symbiotic relationship with the body – for example, working to help digestion, or generating some vitamins and hormones. It is known that maintaining primarily beneficial intestinal bacteria will keep the body’s immune levels high, and that is why we often see products that help deliver live active culture bacteria to the intestines. The reason fermented food is said to be good for the body is that our ancestors understood that delivering live active culture bacteria into our bodies can lead to better health (immunity). When considering those factors, it makes us wonder why we shouldn’t be using EM fertilizers (which contain approximately 80 types of effective microorganisms) more for a variety of health benefits, and not just to spray onto our crops. Drinking EM-X GOLD can help to maintain your body’s inner environment, and has been presumed to raise the body’s entire foundational level of health.

To describe metabolism in a word is difficult, as there are several different types – such as base metabolism, metabolic rate, and energy metabolism. As the immune cells are constantly being regenerated through the metabolic process, a stable supply of ingredients (nutrients) for creating new immune cells is necessary. An environment conducive to building those immune cells is also required, and as that location is inside the blood, the bloodstream needs to always be clean. Furthermore, there needs to be a smooth circulation of biological materials (such as cytokine) which enable cell signaling between immune cells. Therefore, unless these various types of metabolic processes are running smoothly, the blood cannot function properly.
A simple way to raise your metabolic rate is to raise your body temperature, such as through exercise or bathing. The old custom of long-term rehabilitation at spas is based on sound reasoning. Bedrock bathing is effective as well, but as intense perspiration can cause the body to lose precious moisture and minerals, it is important to hydrate regularly. EM-X GOLD can raise the transfer of energy throughout the entire body, and is presumed to raise the body’s entire foundational level of health. 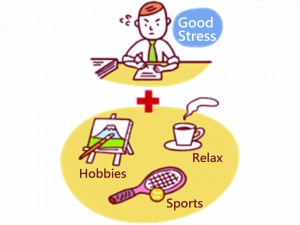 It may be difficult to immediately comprehend what it means when we talk about modulating our autonomic nervous systems. The word autonomy means to be able to operate on one’s own according to one’s own standards, without any outside controls or limitations. The nervous system – in other words, organs or bodily functions such as the heart, blood pressure, the digestive tract, perspiration, and hormonal secretion – is a system which cannot be controlled or regulated consciously.
The autonomic nervous system is regulated by both the sympathetic nervous system and the parasympathetic nervous system. The sympathetic nervous system becomes predominant when the body is awake (during moments of tension or strain). Familiar symptoms would be, for example, when your throat feels dry, or your heart is pounding in your chest because you feel nervous before making a speech. If the body is under constant stress, you may be in a continued state of sympathicotonia, resulting in an abnormal condition where the body is unable to break out of its “fight or flight” state (this can lead to conditions such as insomnia). Conversely, the parasympathetic nervous system becomes predominant when the body is at rest (in a relaxed state), and works to bring the body into a rested, relieved condition. However, an idle lifestyle can lead to a prolonged state of parasympathicotonia, which is not healthy either. It is now understood that when either of the two nervous systems is in a prolonged state of tension, it can lead to a decline in the immune system. Therefore, it is believed that a modulated autonomic nervous system – with appropriately alternating levels of tension (during the day the sympathetic nervous system is predominant) and relaxation (at night the parasympathetic nervous system becomes predominant) – is necessary.
One other thing to note is the importance of being able to relieve and release stress. If you have a hobby or interest, immerse yourself in it. If you don’t have a hobby, try shouting at the ocean, or letting your mind wander while listening to a babbling brook. Just find a way to relax. It doesn’t matter what method you choose. Being mineral-deficient can disrupt the stability of your autonomic nervous system, and lead to autonomic imbalance. The foundation of mineral supplementation is natural salt, so feel free to flavor your foods to your liking (needlessly tolerating bland foods is not good for the soul). Fruits are highly recommended as well.
Although we have talked primarily about the immune system, simply trying to raise your immune levels is impossible. You need to think about improving your entire body’s functionality. The human body is not a simple thing. In any case, perspiring and cutting down on salt is unhealthy, so let’s stop doing that. Furthermore, diabetes (disorder of carbohydrate metabolism) is a clear sign that the immune system has deteriorated, and is a condition that requires strict control and supervision. 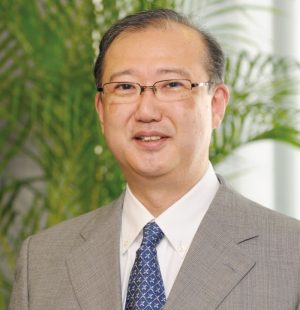 Graduated from the medical department of Tokai University in 1985. After working in neurosurgery at the same university hospital, he engaged in acute care in various hospitals in the city of Isehara, Kanagawa Prefecture for many years. Then, he obtained MD with the research on malignant brain tumors. Medical specialist for The Japan Neurosurgical Society and Japanese Society of Anti-Aging Medicine. Today, he is dedicated to promote preventive medicine, educational seminars, and writing books.