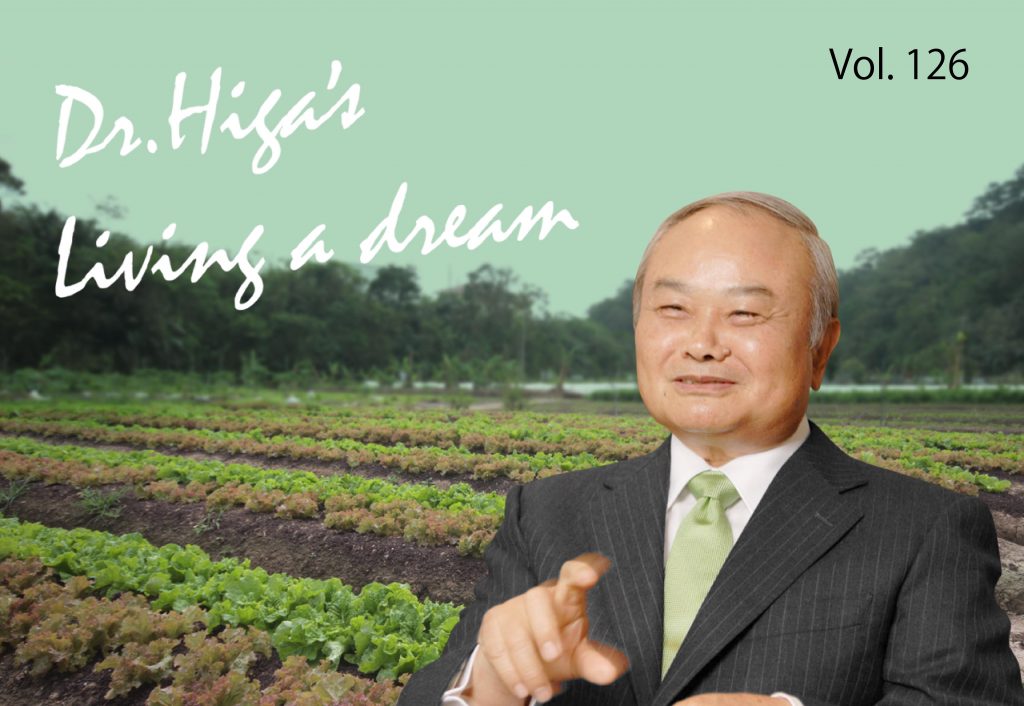 In the second half of the previous issue I mentioned the quantum overlay effect. Utilization of this technology has infinite possibilities, in a sense, so here I will explain it again. In other words, when looking at the utilization method of EM from the viewpoint of quantum mechanics, quality matters more than the quantity; if the quality is the same, the achieved result is decided depending on the number of times it is used, and I refer to the number of times as the quantum overlay effect. Basically it leads to the energy system called “baker’s transformation” (see Wikipedia). In short, it depends on how many times we carefully used EM, and it became clear that that level was recorded in the harvested crops.

In conclusion, using rectifying coal etc. to set boundaries to create energy fields and increase the density of EM, the spot will concentrate energy in a quantum way. In the quantum world, the degree of concentration of energy differs depending on how dimensions, not quantities, are layered.

This can be recognized by anyone who has applied 1 ton of activated EM solution per 1,000 m2 to the energy field all at once, and applied it in 50 portions. Even if the total amount of activated EM solution is the same, it can be said that the difference in quantum overlay effect is different depending on how it is used. It is understood that the energy is replaced by the energy of the quantum unit that transforms the energy whose dimension has changed at the time of division to anything. That is, when you “knead a pie” a large number of times, the dough becomes stronger, and likewise here you create a different dimension of quality.

Pie dough layering transformation (baker’s transformation) is a type of two-dimensional discrete dynamics system, and is known as the basic system that extracts the
typical mechanism for generating chaos. The name follows the operation of stretching and folding of pie dough in cooking. In some cases it is also called a Baker’s Map. In short, it is a mathematical explanation given to the transformation whereby dough becomes uniform by repeating folding and kneading.
The original idea of baker’s transformation was devised in 1937 by Eberhard Hopf. According to him, the original English name “baker’s transformation” was named by John von Neumann in 1949 during a conversation they had. Literally translated into Japanese it is “ bakery conversion” or “bakery mapping,” but it is generally called “pie dough layering transformation,” rather than using the terms “bakery” or “kneading bread.”

In the previous issue, I reported that the quantum wave value of Mr. Kikuchi’s rice in Fukushima was the highest. However, after that, Mr. Tsuneishi’s rice in Kochi Prefecture arrived and we discovered that the quantum wave value of his was even higher than Mr. Kikuchi’s rice, so I asked him to send me his records of how he applied EM up to this point.

Although Mr. Tsuneishi has not been cultivating using EM for a long time, this season, after he got my advice, he worked on utilizing activated EM with sea water, and set EM barriers. The outline of his record is as follows.

• EM mudballs are made of 15 liters of soil : 3 liters of Type 2 bokashi : 6 liters of smoked rice husk charcoal : 80 ml of Fermented Cera C and about 6 liters of activated EM solution with seawater.

• Using conventional methods the harvest is 8 bales per 1,000 m2, but with the above method it was over 10 bales.

• As for the above method, Dr. Higa’s advice is as described below.

• To further enhance the quality of activated EM solution, apply a barrier sticker at the four corners of the culture tank and add 1/10,000 to 1/20,000 of EMX Gold.

The yield in surrounding fields using conventional methods is 8 bales per 1,000 m2, but here the quality is the highest, and the yield is 10 bales or more. (One area had 12 bales.) This is a revolution in rice cultivation. Based on this result, as shown below, I advised to add salt usage and foliar spraying to counter weeds and further increase yield.

Foliar spraying where barriers are made
People generally think that foliar spraying means pesticides carefully sprayed on the entire crop, but in the case of using EM, this is not necessary and there is enough overlaying effect even if it is lightly applied from above. (Photo 1).

Therefore, in the case of a greenhouse, as you see in the photo, we use an unmanned fogging machine or fine mist system, which is more effective if it can be sprayed four to five times a day or more. In the case of rice fields and upland fields, it is sufficient if you use a large sized fine mist sprayer for three to five minutes per 1,000 m2. If the level of the barrier is high, the spraying time can be shortened to thirty seconds to about one minute.

Photo 2 shows after making a barrier, applying 2 tons of salt per 1,000 m2 and cultivating cucumbers, (see issue #122), and then planting tomatoes and Komatsuna. They apply foliar spray three to four times a day using an automatic sprayer. Komatsuna planted next to the stock of tomato plants have grown well, and there has been an unprecedented, stable growth in the tomatoes.

Although it is still unclear what the limits are of such overlaying effects of EM, it is possible to further simplify it if the barrier is strengthened, and in the future reach a level where spraying equipment is unnecessary and it is enough to just spray it in a corner with a watering can. 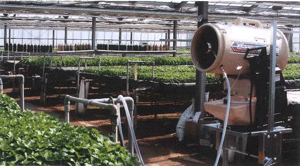 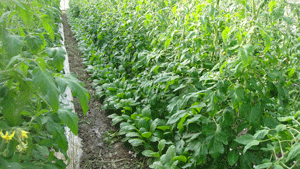