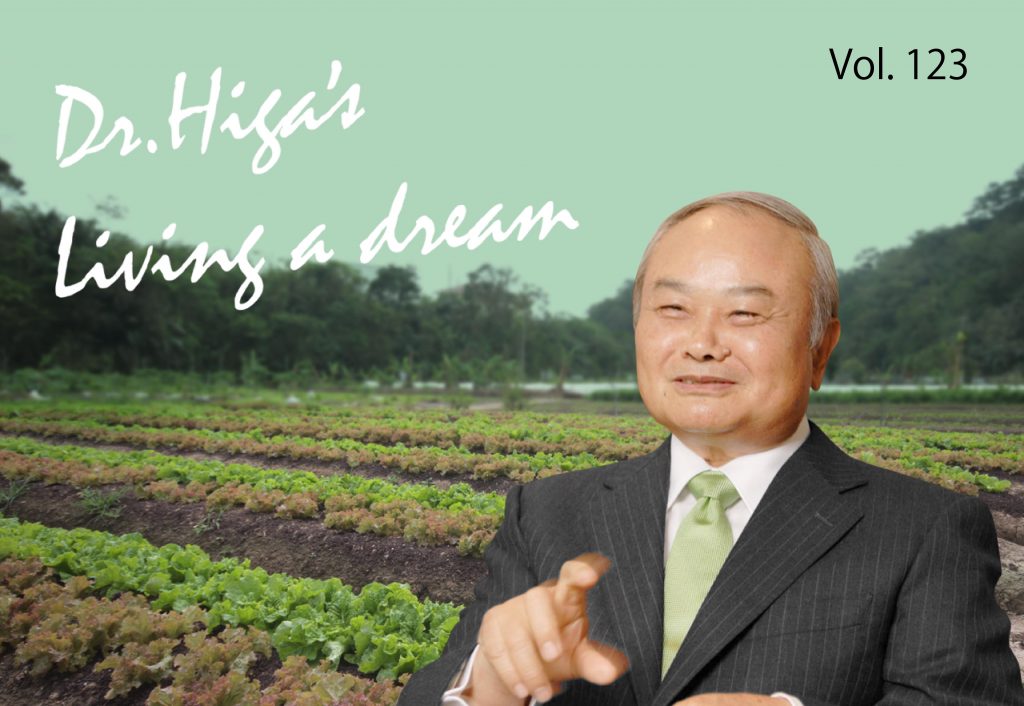 It has been about a month since Everything About Love and Microorganisms was published. It is in its third printing now, and we have been very pleased to hear that readers are re-learning the fundamental power of EM and are taking on new challenges.

This book begins with the comment that the image of the quantum mechanical world is the world of the gods, and as a kind of conclusion the book ends by saying that thoughts are feelings, desires and prayers, which mean that everything depends on that level.

However, sometimes I hear an odd question: “So what can I do?”

The effects depend on the amount of altruistic feelings, and correlates to the amount of gratitude and love one has. The basic idea is to make high quality activated EM solution and always express one’s thanks (Hado waves) to the container and tank, adding a prayer that the effects of EM will increase where it is applied.

In the third part of this book I praised Mr. Hidenori Ashikaga as “Mr. EM,” but everyone who has achieved miraculous results using EM has essentially been following the same mindset as Mr. Ashikaga. The following article is originally from one of the articles in Declaration of a Healthy Life, an EM information publication from EM Seikatsu, Inc. I would like to introduce this article again because it is a representative example of “the Truth of EM” and I hope that it will be useful for improving the power of EM for many EM users.

I lost everything because of the earthquake, but I couldn’t be happier. 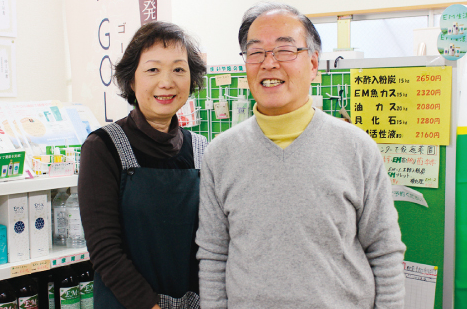 The beautiful sea of Kesennuma is my heart’s true home

Fate led me to Kesennuma city again in 1972, where I got married. At that time the pollution of the sea had progressed to the point where it smelled really bad. When I told my wife, “I would like to clean up the ocean”, she said, “Are you crazy?” People didn’t care about protecting the environment at that time. Then, when I was over 40 years old, I was very sick but survived, and my wife told me, “You can do whatever you want.” I decided I really would like to clean up the sea at Kesennuma and make it as clean as it was in my childhood. I created a set of principles, and started various organizations, and I have been working on this ever since.

What we gained from the Great East Japan Earthquake 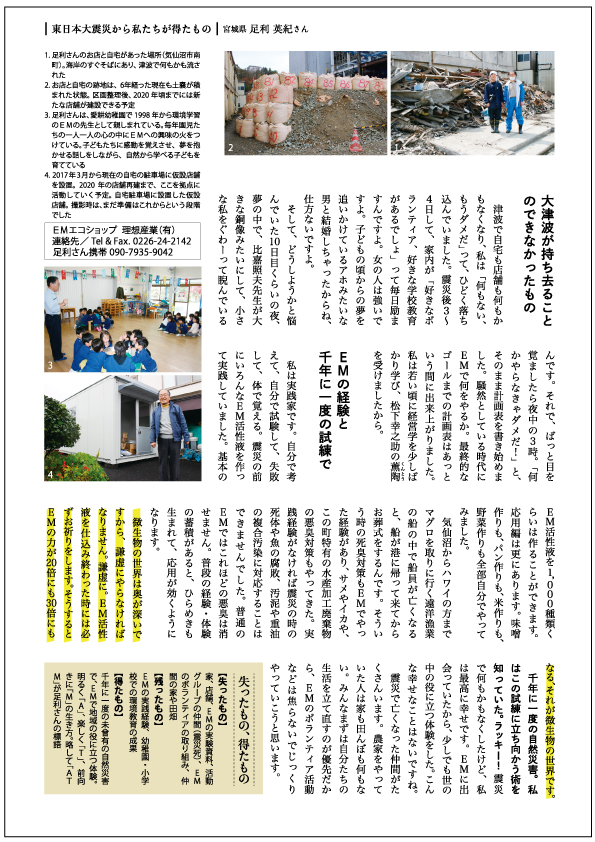 1.This is the place where Mr. Ashikaga’s shop and his house were located (Minami-cho, Kesennuma). It was located just off the coast and everything was swept away by the Tsunami.

2.At the site of the shop and his house sandbags are still stacked up six years later. They plan to build a new shop around the year 2020 after town planning is complete, after the local government has re-designated building lots.

3.Mr. Ashikaga is popular as a teacher of EM environmental education since 1998 at Aiko Kindergarten. Every year his teaching sparks great interest in EM in all the children. He is helping raise children to learn from nature, helping them to be moved by it and be full of hope for the future.

Things that the Great Tsunami could not take away

I lost everything, my house and shop in the tsunami and I was terribly depressed,
I felt there was nothing left, and I could not go on anymore. Three to four days after the earthquake, my wife began encouraging me every day saying, “You have your favorite volunteer work, your teaching, don’t you?” Women are strong. Well, she cannot help but be strong since she married a man like me who is still chasing after childhood dreams.

On the night of the tenth day, when I was worrying about what to do, Dr. Teruo Higa appeared in my dream like a big statue glaring at me, who was much smaller, with wild eyes. I snapped awake and saw it was still only 3 am. “I have to do something!” I told myself, and immediately began working out a plan. I asked myself what I could do with EM in these turbulent times, and in no time at all, I completed a plan to achieve the final goal. I was able to do this because I studied some business science since I was young, and had been influenced by Mr. Konosuke Matsushita (the founder of Panasonic).

Experiences with EM and a once in a thousand year trial

I am a practical man, a doer. I think by myself, test things by myself, and learn through mistakes and actual practice. Before the earthquake, I had been making various kinds of activated EM solution. I can make around 1,000 kinds of basic activated EM. There are even more ways to apply it. I also made miso, bread, rice and vegetables all by myself.

When a sailor dies in an ocean-going fisheries ship going from Kesennuma to Hawaii to fish tuna, the funeral is held after the ship returns to port. I had experience with the countermeasures to deal with odors of the dead at that time, and I have been dealing with countermeasures against foul odors in municipal fisheries processing waste, for example, sharks and squid. Without these practical experiences, it was impossible for me to respond to the decay of corpses and dead fishes, and the combined pollution of sludge and heavy oil at the time of this disaster. With ordinary EM, it is impossible to eliminate such a foul smell. But if you have accumulated personal experiences, as I have done, you get inspiration from them and various applications will be effective.

I was lucky! I knew the way of overcoming this once in a thousand year trial.

I lost everything because of the earthquake, but I couldn’t be happier. Since I was familiar with EM, I had some experiences that were useful for society. Nothing could be more pleasing. There are many colleagues of mine who died in this earthquake. Farmers here have no houses or rice fields. Everyone has prioritized rebuilding their lives, so I think that we will steadily continue our EM volunteer activities.

What I Lost, What I Gained

〈What I gained〉
Personal experience that I could be useful using EM for society during this once-in-a-thousand year unprecedented natural disaster. Living a happy daily life, enjoying life and having a positive attitude. (“ATM” has become Mr. Ashikaga’s personal slogan–A as in “akaruku”—cheerfully, T as in “tanoshiku,” enjoyable, and M as in “maemukini,” thinking positively.)

The extent of damage at the time

Kesennuma City has an area of 333 km2 and a population of about 64,000 people. The number of victims of the Great East Japan Earthquake totaled 1,433, including 1,170 direct deaths, 108 related deaths and 218 missing people. The number of damaged houses is 15,815. (As of February, 2017. Reference: Miyagi Prefecture official website)

Kesennuma City is the town with the largest volume of sharks caught in the country, and has long been known as a major shark fin production center. It is a lively town as a base for coastal fishing, offshore fishery and deep-sea fishery, and has a wide range of fishery industries ranging from related shipbuilding to fishery processing.

The tsunami that hit Kesennuma harbor was a coal black tsunami from sludge stirred up from the sea floor. 22 heavy oil tanks located in the coastal area were swept away, and the heavy oil that flowed out to the bay ignited and kept on burning for 72 hours. 14 large fishing boats anchored at the harbor were launched up onto the land by the powerful tsunami. Most of the marine processing plants were destroyed. Large amounts of fish, such as fish stored in freezers or refrigerators, were washed up on land, putrefied, and became a strong source of terrible odors. Large-scale sewage treatment plants and wastewater treatment plants of marine processing plants were also catastrophically damaged, and untreated sewage flowed into Kesennuma Bay for a long time.

The whole town of Kesennuma was filled with large amounts of dead fish.

The state of Kesennuma City at that time