90% of Your Body is Microbes 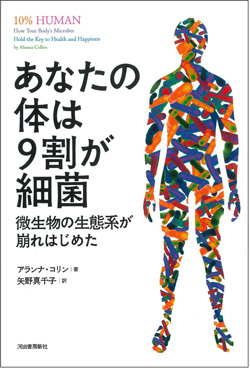 A book titled, 10% Human by Alanna Collin, was translated into Japanese under the title 90% of your Body is Microbes and published by Kawade Shobo Shinsha at the end of August this year. In the book, the author writes:

You are just 10 per cent human. For every one of the cells that make up the vessel that you call your body, there are nine impostor cells hitching a ride. You are not just flesh and blood, muscle and bone, brain and skin, but also bacteria and fungi. You are more “them” than you are “you.” Your gut alone hosts 100 trillion of them, like a coral reef growing on the rugged seabed that is your intestine. Around 4,000 different species carve out their own little niches, nestled among folds that give your 1.5-metres-long colon the surface area of a double bed. Over your lifetime, you will play host to bugs the equivalent weight of five African elephants. Your skin is crawling with them. There are more on your fingertip than there are people in Britain…. Together, the microbes living on the human body contain 4.4 million genes – this is the microbiome: the collective genomes of the microbiota. These genes collaborate in running our bodies along-side our 21,000 human genes. By that count, you are just half a percent human.

Admittedly a long quote, but the point is that the human body is supported by an extraordinary ecosystem of microorganisms.

From the latter half of the 20th century to the present, autism, various allergies and intractable diseases have been occurring more frequently. Alanna Collin concludes that the healthy microbial ecosystem has been compromised because of daily use of
convenient chemical substances, including disinfection, antibiotics, etc.

This book gathers a lot of convincing evidence, and it summarizes this without leaving any room for objection. If one re-reads and understands the quoted part at the beginning, EM stakeholders will not say “No way” but rather find it eye opening, nodding their heads in agreement.

They say that the increase in incurable diseases is due to the damage done to microorganisms that exist like God, supporting all existence on Earth, but solutions to these are as follows:

1. Stop excessive use of chemically synthesized substances such as disinfectants and detergents due to an excessive concern for hygiene.

2. Stop the overuse of antibiotics, insecticides, and chemicals used in sterilization.

3. Ensure that the microbiome in the intestine becomes beneficial by taking enough vegetable fiber to serve as a substrate for good bacteria (food source).

4. If you still cannot solve the problem, transplant the stool of a person who has healthy microbiota.

We are firmly convinced that if these four points are put into practice the majority of diseases will be resolved.

Certainly it is true that triggers of diseases include various stresses, electromagnetic waves, radiation (including medical exposure), air pollution and water pollution, as well as problems related to modern agriculture that structurally requires fertilizers and agricultural chemicals, as well as unfair systems in an excessively competitive society, and even aspects of individual human personality. 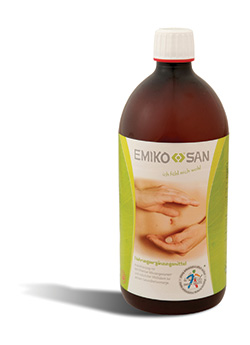 In the United States and Germany, drinkable EM is on the market. Although not widely promoted, the volume of sales has increased dramatically every year, and it is common knowledge that various health problems have been resolved through it use. Even in our country, there are many people maintaining optimal health by drinking EM of their own accord, using herbs and fruits and so on to make fermented beverages with EM.

There are some reports that in the case of epigenetic-caused dysfunctional genes, genetic defects were considerably corrected when drinking EM. In the accepted wisdom of traditional medicine this is considered impossible, and is seen to lie in the realm of the miraculous.

This book also introduces the fact that microorganisms function complementarily with genes that do not function sufficiently, and that microorganisms support various functions beyond the limits of human genes. For DNA (gene) absolutists, it is a theory that should not be tolerated, but it is already clear who the winner is.

Classical physicists dismiss out of hand my argument that microorganisms render electromagnetic waves harmless or eliminate radioactivity. However, the function of ultra super microorganisms, including the atomic transformation by microorganisms, etc., has become clear, something that goes far beyond the contents of this book. 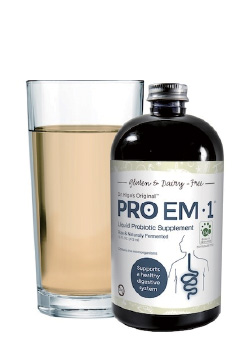 “PRO EM-1,” EM for human consumption in the U.S.
Until now, when we used EM, treating it as almost divine, miraculous things have happened many times, but if you we ignore EM, or treat it as a mere servant to be used for your own selfish purposes, then you won’t have any good results. In principle, the resonance effect of the person using it and the EM sympathetically amplify energy, a common phenomenon also recognized in the world of “ki” and prayer.

Some books have begun to appear that attempt to use quantum mechanics to explain such diverse phenomena, and experimental results demonstrating the principle of homeopathy have also appeared. That is, vibrational energy is applied to water, substances and microorganisms are added to it, then it is gradually diluted, ultimately to a level where no such substance or microorganisms exist, however the wave properties remain, and these function in the reproduction of the substances and microorganisms. 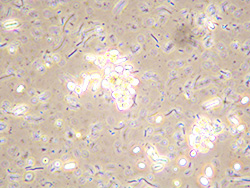 The methods of amplifying this quantum state (Superconductivity and the Meissner effect) are also utilized as the principle behind various ascetic disciplines, and when the enzymes that microorganisms have function, this creates a quantum state. From this point of view, atomic transformation by microorganisms is only natural, and it is correct to say that effective microorganisms such as EM are like an almighty God.

If this book 90% of Your Body is Microbes is taken as the most important basis for understanding microorganisms and EM application is further developed from this perspective, the majority of diseases will disappear, and it goes without saying that safe, comfortable, low cost, high quality, virtuous cycle, sustainable solutions can be achieved in all fields, including the nation’s finances.