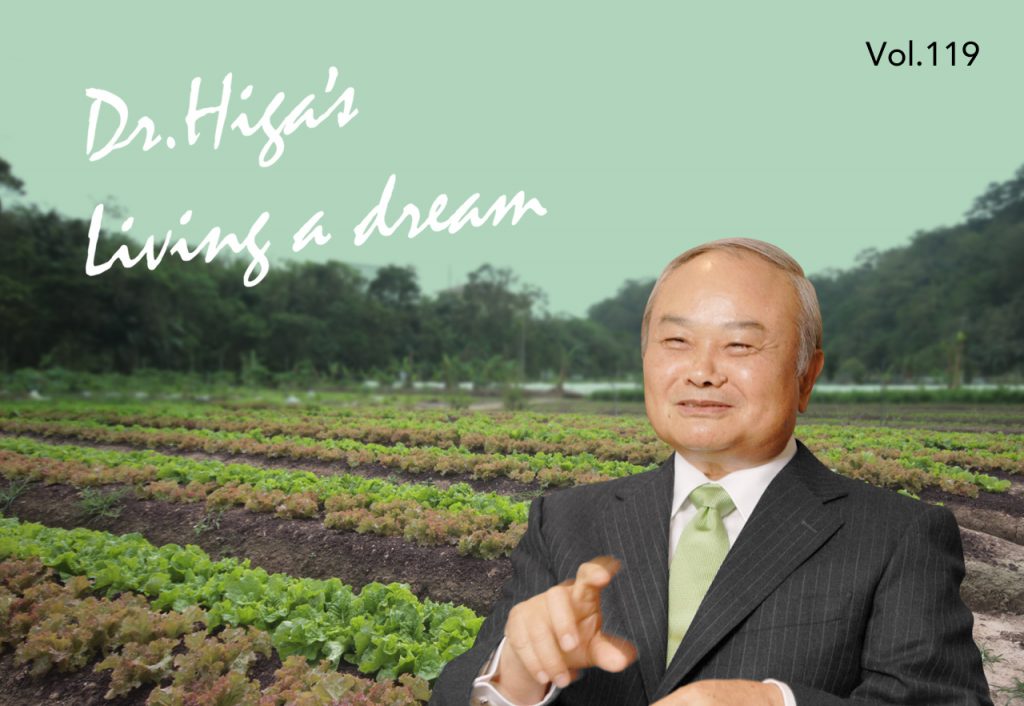 In the previous issue, I introduced the case of Takahashi Farm in Yamagata Prefecture as an example of the barrier effect using EM rectification power. From last year to this year, there is a rapid increase in reports of people realizing numerous breakthroughs. Both are the result of using a combination of seawater-cultured activated EM solution and EM graviton rectification barriers. This time we look at information gathered by Mr. Nomoto of the Ehime EM Promotion Association:

“Mr. Yasukawa, a strawberry farmer, found out about EM at a lecture in Uwajima City about 20 years ago and immediately started to use EM. Although it did not work as well as Dr. Higa had said, he continued to grow pesticide-free strawberries using EM. I heard that every year after March, after harvesting twice (2nd flower), he basically let the fields go, due to powdery mildew and the spread of aphids. However, at a lecture last year he learned about seawater activated EM solution and rectification technology, and he decided to take on the challenge again, so I guided him as follows.

1. Every 2 to 4 weeks from January a 1:50 solution of seawater activated EM solution was applied in the same amount as irrigation water. When powdery mildew occurred, he sprayed the stock solution of seawater activated EM solution, then lightly rinsed off with water after two hours. This suppressed the mildew, and at the same time it was possible to suppress the occurrence of aphids.

2. From February 15th to 18th we stretched out mini rope around the outer periphery of the greenhouse and the strawberry’s ridge and rectified this using a pen touch (rectification pen). As a result, after March we had the amazing results seen in the photographs shown here.

3. I talked with Mr. Yasukawa about an example in Okinawa when an entire greenhouse was rectified, and how this made it stronger against typhoons and various disasters and how the plastic of the greenhouse didn’t need to be replaced for over 20 years. Although his strawberries were originally quite sweet, using this new EM technology created a more concentrated sweetness, and now they have many new customers.”

Specifically, it is as shown in the photos below. 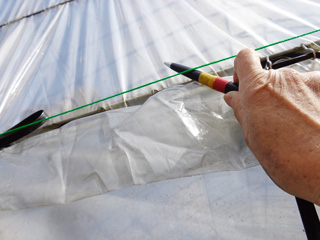 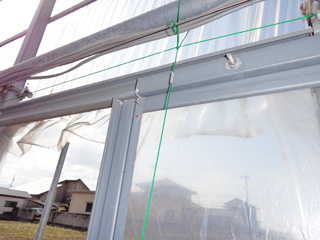 Photo 2: Inclusion into the greenhouse 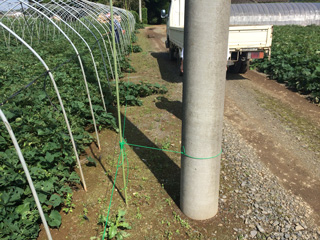 This shows the situation one month later, on March 13th. Photo 5 shows that though the stalk weakens and turns yellow and sprouts do not come out in an average year, here many healthy sprouts are growing. Photo 6 shows the growth condition of the entire greenhouse on March 13th. Photo 7 shows the conditions after the stock solution of seawater activated EM solution has been sprayed on the strain in which powdery mildew or soot disease has occurred, then is gently rinsed off with water after two hours, and how the plants have recovered. In this case, since the entire plants have become hard, there is no particular problem even if the solution is left on for two hours, but for soft, hirsute crops like tomatoes and cucumbers, rinse them in about 15 minutes or dilute the solution by 10 times and spray it. In any case, an over concentration of salt will cause damage, so be especially careful when the temperature is high. 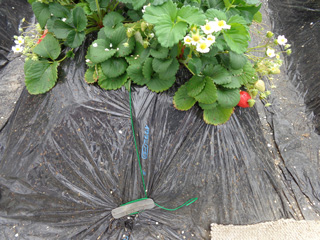 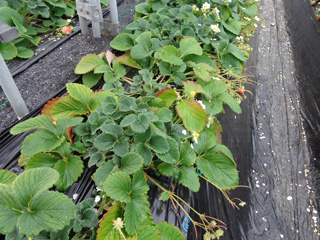 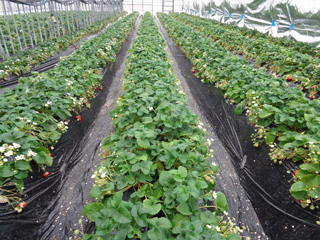 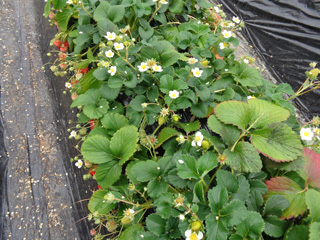 Photos 8 and 9 show the situation on March 25th, by which time the fields growing vigorously. 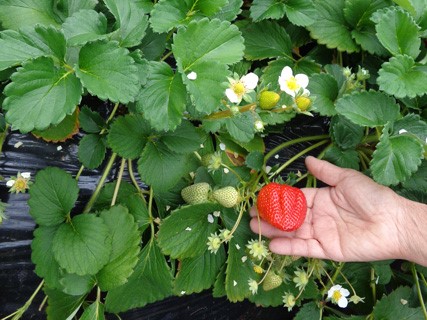 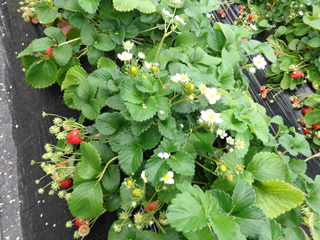 Photos 10 and 11 stalks are now like new plantings, and again this is the prime time for harvesting. 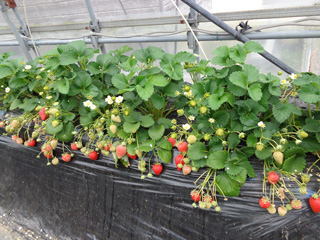 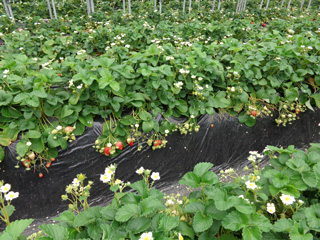 Photos 12 and 13 show a view of the whole greenhouse and how the plants have recovered perfectly. 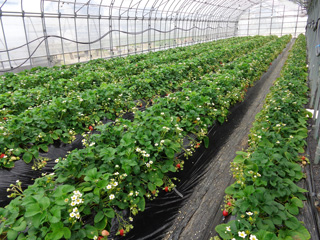 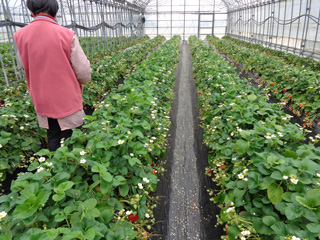 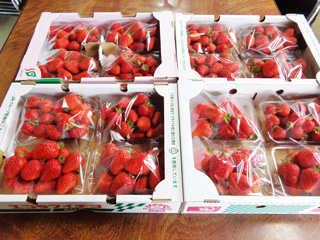 Photo 14 shows some of the 2000 packs of strawberries harvested from 2000 roots. Flavor, shape and size are all very satisfactory.
These great results are the result of adding EM to the real value of EM in greenhouses that have long been using EM and doing pesticide-free cultivation. However, you could say, conversely, that what we were doing up till now did not draw out the full power of EM, because the quality of the activated solution had not reached that level. Activated EM solution utilizing seawater is excellent for suppression of germs and long-term alteration prevention, and it also serves as a mineral supply source, so farmers cultivating with EM should stick to this technology.

At the same time, adding rectification technology has allowed the real value of EM to be demonstrated, but if the entire soil is rectified by using rectifying coal, conventional soil improvement becomes unnecessary and no-till cultivation becomes easy. That is, after harvesting, apply 500 to 1000 kg of salt per 10 a, and after letting all the stalks and weeds wither and die, then apply a 1:50-1:100 solution of seawater activated EM solution to spread throughout the field. Since this method eliminates the need for fertilizer, soil disinfection, and soil improvement, this method is directly linked to a revolution in greenhouse cultivation.