As EM has become widely used in fields other than agriculture, the revitalization phenomena has clearly appeared in various fields. Use of EM will not only stop rust in agricultural equipment and in barns, but continuing to wash cars with EM will stop cars from rusting, their engines’ efficiency will improve, as will mileage, and driving stability will be significantly improved. Wiping the interior of the house, including electric appliances, with EM will make dust and house smell disappear, the function of the electric appliances improve, and electricity charges drop by more than 10%.

I hear that as a result of their dedication to EM life, entire families no longer have to make unexpected trips to the hospital. Damage caused by wild cats and rats has also decreased, with everything I hear about its application sounding advantageous to humans. Common sense would label this “foolish,” yet as someone who understands the amazing power of EM, I can’t ignore such information and always try to verify it.

First of all, if you ask someone who is familiar with EM, and small groups such as EM study groups, almost without exception you will obtain similar information. This results in a posteriority-based application. That is why EM technology is said to be progressing rapidly.

In order to stabilize such properties, EM ceramics, EM concrete, EM building materials, etc. were produced. However, regarding the barrier effect of EM, this has its origin starting in my own private experimental field I started 15 years ago, which I call Blue Sky Palace, in which I installed plastic bottles containing activated EM solution, and EM ceramics such as Pipe 35.

I seemed to get results from this, but wasn’t satisfied with them, so I added Super Cera to every fifth bottle, the ones with activated EM, and connected the hanging bottles and Pipe 35 with rope.

This had amazing results. Damage caused by Taiwan Shirogashira (Light-vented bulbul birds that flock and devour crops), which has frequently occurred, and damage caused by brown eared bulbuls, drastically declined, until there was no damage at all. I was astonished at the power and introduced it in my lectures.

As explained in the 108th issue of this series, many people have dealt with wildlife damage countermeasures utilizing this principle. Everything worked very well, and on top of that, with this method the yield and quality of crops within that barrier have improved remarkably. In order to make this spread further and become even more reliable, I created rectifying stickers with a higher Hado and challenged many stakeholders, including Mr. Sameya in Yamanashi Prefecture and Mr. Takahashi in Yamagata Prefecture, to adopt this method.

Initially, I asked them to implement the method of surrounding the plastic greenhouse and orchards with a strong synthetic fiber mini-rope, and put rectifying stickers at the four corners and cover the stickers with insulating tape, etc., taking potential voltage from adjacent utility poles. In a place without poles, put 500cc of seawater activated EM solution in a plastic bottle and add 1g of charcoal (rectified charcoal), 1g of Super Cera C, and 1cc of EM-X GOLD, then close the bottle tightly. Next, place two 3V lithium ion batteries that can be obtained at a Dollar Store on the bottom or side, put them in a small plastic bag so as to become 6V, and seal it so that the solution won’t leak. We use it as a Hado source and potential voltage source. If you place high Hado rectifying stickers on the four corners, you need use only one Hado source and there is no need to install it at the four corners. Since no current is generated, theoretically the battery lasts semi-permanently.

• If there is no rectified charcoal available, you can make it with regular charcoal and 10g of Super Cera C. For details, please refer #108 in this series.

If there are shelves and tree staking wires in orchards of grapes, pears, apples, etc., connect these with the barrier line so that the Hado will go through the entire orchard.
Reports from local sites
At the EM Producers Networking Meeting held in March, there were reports from Mr. Sameya and Mr. Takahashi. Mr. Sameya got a very desirable growth of grapes and peaches after installing the EM gravitron stickers (rectified stickers), and got results that he had never experienced before. The antioxidant power of the fruit was also remarkably high, the sugar content was also high and shelf life was improved. The soil microflora has also been significantly improved, and various efforts so far have brought excellent results. He reported that he would like to continue further improving this technology and introduce it so it will become more widely used.

​Mr. Takahashi sent us very similar comments on his success in producing cherries and also apples and peaches, etc. For reference, I include photos of the Takahashi Farm that were shown at the meeting referenced above.

As is obvious from the pictures, in this case there is a single barrier line around the circumference. It is also clear that the effect will be even more enhanced if you connect the barrier line to the shelf or set it to 2 to 3 layers, and setting it in 2 to 3 m intervals to form a grid in the whole orchard. 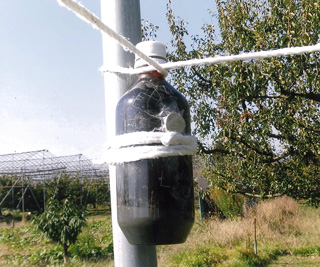 1. Plastic bottle for barrier as Hado source
(Round lithium ion battery is affixed) 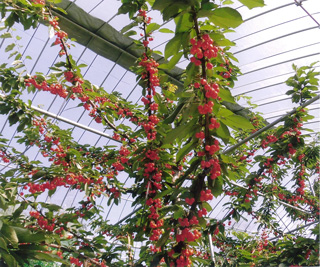 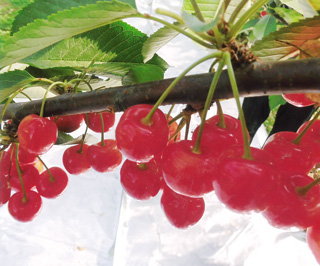 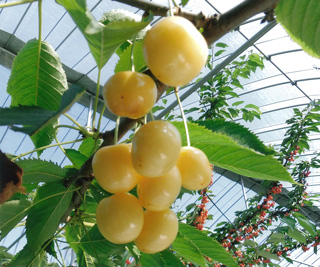 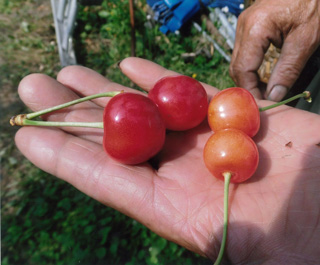 5. Left: Cherries grown in the barrier area
Right: Those grown in an ordinary area 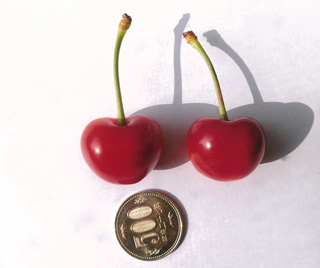 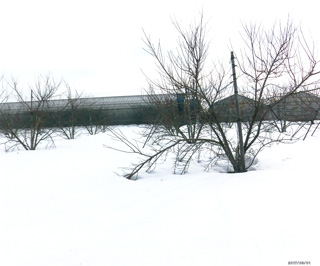 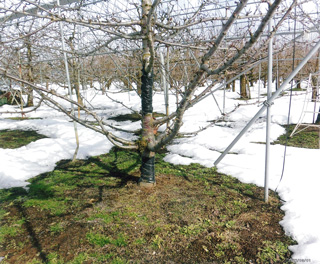 Naturally, this barrier line functions almost perfectly also as a measure to prevent wildlife, so I look forward to future applications. Other reports were sent to this meeting including similar reports on Ponkan (Chinese Honey Orange), Buntan (Pomero), Unshu mandarin oranges, etc. One effect of the barrier is that coherence (quantum beat) occurs inside the enclosed area. In other words, the energy of the space is rectified and it is strengthened so that the plants can use it. However, if the line breaks it will be ineffective, so it is necessary to always watch over it to make sure that the barrier is functioning.

We can apply this principle to the soil. We first make rectified charcoal transferring the Hado into the Smokeless Carbonizer using EM rectified stickers, then make rectified EM mudballs mixing equal amounts of the rectified charcoal, soil and salt.
The method is to embed the above rectified EM mudballs putting them at the four corners of the field and at both ends of the ridge (at a depth 30 to 50cm, and at 10 to 30m intervals). Unlike open space, soil moisture and particles conduct Hado, so no ingenuous solution like a barrier line is necessary. Since the energy of the soil inside it is rectified to a high level, we can increase the atomic diversion power of EM and further breakthroughs will be possible.